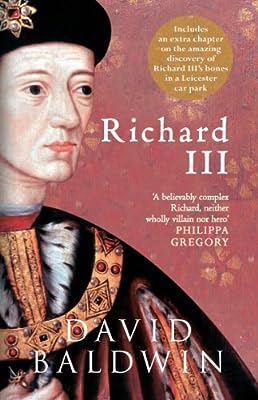 Price: Click Button for Price
Buy Now from Amazon
Product Information (more info)
0 0
CERTAIN CONTENT THAT APPEARS ON THIS SITE COMES FROM AMAZON SERVICES LLC. THIS CONTENT IS PROVIDED 'AS IS' AND IS SUBJECT TO CHANGE OR REMOVAL AT ANY TIME.

The first biography to show what Richard III was really like. Not many people would claim to be saints, or alternatively, consider themselves entirely without redeeming qualities. Some are unquestionably worse than others, but few have been held in greater infamy than Richard Plantagenet, afterwards Duke of Gloucester and, later still, King Richard III. Richard's character has been besmirched as often as it has been defended, and the arguments between his detractors and supporters still rage after several centuries. Was he a ruthless hunchback who butchered his way to the throne, a paragon of virtue who became a victim of Tudor propaganda, or (as seems more likely) something in between? Some would argue that a true biography is impossible because the letters and other personal documents required for this purpose are simply not available; but David Baldwin has overcome this by an in-depth study of his dealings with his contemporaries. The fundamental question he has answered is 'what was Richard III really like'.