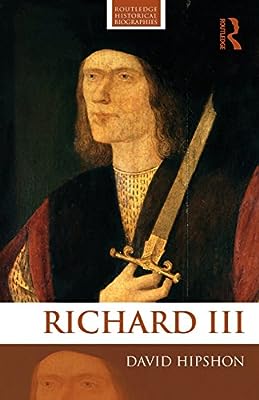 Price: $41.95
As of 2020-08-19 10:56:35 UTC (more info)
Product prices and availability are accurate as of 2020-08-19 10:56:35 UTC and are subject to change. Any price and availability information displayed on http://www.amazon.com/ at the time of purchase will apply to the purchase of this product.
Buy Now from Amazon
Product Information (more info)
CERTAIN CONTENT THAT APPEARS ON THIS SITE COMES FROM AMAZON SERVICES LLC. THIS CONTENT IS PROVIDED 'AS IS' AND IS SUBJECT TO CHANGE OR REMOVAL AT ANY TIME.

Despite reigning for only a relatively short period of time, Richard III is one of Englandâ€™s most controversial monarchs. His life and rule has inspired a huge amount of literature, not least Shakespeareâ€™s great play, and controversy still surrounds his seizure of the throne in 1485, the mystery of the disappearance of the Princes in the Tower, and his defeat and death at the Battle of Bosworth in 1485.

This new biography takes a nuanced view both of Richard IIIâ€™s reign and of the controversies surrounding it, exploring them in the wider context of the period. Defining Richardâ€™s character as central to the analysis of his actions, David Hipshon emphasises the need to separate the man himself from the caricature that has so often been painted.

Incorporating new research and previously unpublished material, this book is a must-read for all those interested both in Richard III as king, and in the development of the English monarchy and society at the end of the medieval era and the beginning of the early modern period.

The King's Grave: The Search for Richard...

The King's Grave: The Discovery of Richa...